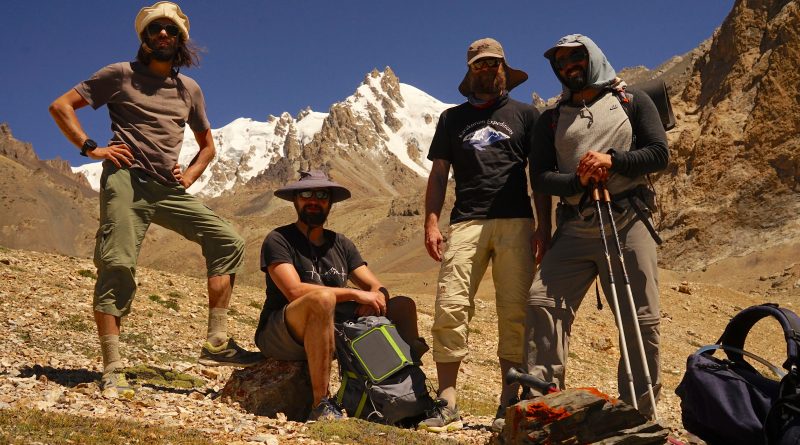 Shimshal, the valley and its surrounding mountains, was suddenly on the agenda this summer. We were looking for a feasible alternative to the Tien Shan Mountains: Kyrgyzstan and Kazakhstan were closed, but Pakistan was opening its borders. So the expedition leader Felix Berg contacted Ali Mirza Baig, who comes from the Shimshal village, and it was quickly agreed that we would start an exploration at an altitude of around 6000 meters.

Ali Shah Baig and Sher Zaman provided us with delicious food in the base camp. During the 3-day trekking in the valley some porters and mule drivers helped us.

Getting to the base…

On August 9th, Pakistan opened its borders, Felix traveled to Islamabad ahead of the team on August 10/11 and the rest of the German team followed on August 12/13. We reached Shimshal village, where about 2000 people live, and where Mirza Ali Baig’s family comes from and many of his relatives still live, on August 14th. There our plans were finalized and we started the trekking the next day. On the 1st day we reached Gar-e-Sar („over the head of the stone“), on the 2nd day Purien-e-Sar and on the 3rd day the newly named Michelle Basecamp at approx. 4950m, which we moved into for the first time.

Climbing in the Shimshal

The weather was excellent during our approach to the base camp. With the exception of some small mostly morning disturbances with rainfall, the following seven days that we had planned for climbing were very good and could be used.

Description of ascent: At 5:00 we started the ascent from the base camp. Rocky terrain led to a ridge (5300m). After a flattening (approx. 5400m) this led over boulder terrain to snow fields/glaciers (40-50° steep), which were crossed uphill to reach a saddle (approx. 5700m). A corniced ridge led over steep slopes (60°) to the summit, that was reached by the participants between 10:00 and 11:00. During this time Felix, Patrick and Gabriel climbed the secondary peaks, which were a few meters lower. The descent was started together and between 12:30 and 14:00 the team reached the base camp.

Description of ascent: At 4:30 we started the ascent from the base camp. From about 5300m a glacier / snow field led into the steepening left couloir. After a narrow passage (55° hard ice), 45-50° slopes followed, partly covered with jagged firn. At the end of the couloir we crossed right (block terrain, II/III) into the icefield below the col (approx. 6070m) between the double summits. The right main summit was climbed northwards over steep snow slope and mixed terrain (M4/5, approx. 10m). The main summit (6105m) was reached between 11:40 and 12:10. Patrick climbed the secondary summit (approx. 6080m), which was technically easy to reach over a snow ridge from the col. The descent was mainly done by abseiling down the central main couloir to the glacier. We followed in roped team over some crevasses to the ascent route. Between 16:00 and 18:00 all participants were back in the base camp.

Description of ascent: At about 6:00 we started the ascent from base camp. We entered the couloir at 8:00 a.m., which led over a climbing length of about 550m (height difference 400m), mostly 50-55° steep to the saddle (about 5700m) on the right side of a prominent rock tooth. The team reached this at 12:15 p.m. Markus slipped on the final meters of the couloir, which led to the cancellation of this climb.

Names, region: The mountains are located in the northern Shimshal, Karakoram, along the path to Shimshal Pass on the left / northeast side of the valley. The mountains were previously unclimbed and therefore unnamed. Koh e Dhg’hg means „mountain of daughter“ in the locally spoken Wakhi language, and AM stands for Astrid-Maria. Far left in the chain is Samina Peak (5900m), named after Samina Baig, who climbed the mountain with her brother. It is also known as Chashkin Sar („over milky grass“). In the spirit of this story of Women Empowerment, the names were named after women, the highest mountain accessible to everyone was named after the daughter, and thus agreed upon and recorded with the SNT (Shimshal National Trust).

With our last climbing tour the expedition became very adventurous. Accident, fortunately very minor injuries, quick rescue on the mountain, waiting for the helicopter and transport of one climber to the hospital: That’s how the last two days at the base camp passed. For the planned departure on August 26th, the weather became worse: The trek was already a bit more thrilling, but the expected rock fall luckily did not happen.

The monsoon hit Pakistan late. Flooding in Karachi and mudslides in the north made headlines. After 2 days of trekking we had to walk from Shimshal to Gilgit on August 29th to avoid a blockade and experienced some rockfall “attacks” on our car. Fortunately the weather became a bit more stable after that, the alarm clock was set to 4:30.

On August 29th we left Gilgit and headed for Islamabad along the Karakorum Highway. Past previous accidents and several kilometers of walking included, we reached the airport after 15 hours, just in time for the check-in. Surprise at the airport: supposedly underlying the new pandemic regulation, Qatar Airways refused to take us on board, but Turkish Airlines accepted us. So after some additional last-minute stress before the departure, we flew out with a different airline and landed back home after almost 3 intensive weeks of climbing and adventure.